In the past, television programs such as «The Jetsons» illustrated a potential future in which
objects performed menial tasks for their owners. Although the program's prediction of flying cars still hasn't come to pass, automated objects that we can control remotely - the Internet of Things - provide proof that the future is here now. The Internet of Things has come of age so gradually that you may not have stopped to think how revolutionary the end result is. In this article, we'd like to take a step back and discuss recent IoT history. If you don't have the time to read the full article, scroll to the bottom and look at our infograph IoT instead! Our infograph IoT contains a summary of the information presented here.

IoT history arguably begins with the first known Internet-connected device: a soda machine
in the computer science building at Carnegie Mellon University. Hackers love their caffeine,
and the soda machine was a lengthy walk from the areas in which many of the students
worked.

The students created sensors capable of monitoring whether the slots in the machine were stocked or empty. The sensors could also detect whether the bottles were cold by tracking the amount of time elapsed since the last restocking. In those days, the modern Internet didn' exist yet - and only about 300 computers around the world could access the ARPANET.  Nevertheless, any computer in the world with an ARPANET connection could check the status of the Carnegie Mellon soda machine and find out whether it had cold beverages available. It would still be many years before Internet-connected appliances would become available to the general public.

What does every developer have to consider when planning an I-o-T project ?

In 1989, Dan Lynch - the president of a networking technology show called Interop - told TCP/IP protocol co-creator John Romkey that he could have a featured spot in the next year's show if he could create an Internet-connected toaster. Romkey did exactly that, bringing a toaster to the 1990 Interop convention that could accept commands over the Internet. The next year, Romkey added a robotic arm that also accepted Internet controls.

The arm placed bread in the toaster, and the toaster automatically browned the bread. Since the toaster used the TCP/IP networking protocol, it was perhaps the first IoT device in the modern sense.

1999: The Internet of Things Becomes a Thing

While working for Procter & Gamble, Kevin Ashton became curious about why a certain shade of lipstick always seemed to be sold out in a local store. Ashton theorized that adding RFID chips to products might provide a means of establishing where products were and why they were sometimes unavailable. He presented his idea to management using the term «Internet of Things» - the first usage of the term.

In 2003, students at an Italian design institute invented Arduino - a single-board computer ideal for use in small Internet-connected devices. After years of development, Arduino would blossom into an inexpensive open-source product used in hundreds of thousands of consumer devices.

Released in 2011, the Nest Learning Thermostat was among the first IoT devices to benefit from a wide marketing push. The Nest Learning Thermostat uses Wi-Fi communication to gather local weather data and track users' habits. Using the collected data, the thermostat can provide comfortable heating and cooling while reducing wasted power. The thermostat can even connect to users' phones and reduce its own power consumption when no one is home.

The 2015 Fitbit IPO is proof that the Internet of Things has truly come of age this decade. Fitbit is a wearable fitness tracker that records the user's location, activity level, heart rate, quality of sleep and more. Using wireless communication, Fitbit devices can synchronize with smartphones and other devices to provide real-time activity reports. The 2015 IPO valued Fitbit at $358 million, although Apple Watch and other wearable products have since decreased the company's prominence.

2016: IoT Security Becomes the Next Frontier

On October 21, 2016, attackers used a botnet - a network of hacked devices under remote control - to execute a distributed denial-of- service attack against DNS provider Dyn. The attack rendered popular websites such as Twitter, Netflix and Reddit temporarily inaccessible. Researchers determined that the botnet responsible for the attack consisted of hundreds of thousands of hacked wireless cameras, routers and other IoT devices. IoT botnets have become so large and powerful, in fact, that their controllers rent them out on hacking forums and the deep web. In effect, anyone with money and ill will can hold virtually any website or online service for ransom.

The Next 30 Years of IoT History

During the first 30 years of the Internet of Things, developers focused on creation - solidifying the underlying technology, identifying consumer needs and building devices to satisfy those needs. We have reached the point, though, at which there are now billions of Internet-connected devices - and many of those devices have inadequate security. While an army of Internet-connected cameras can bring a website down, it can't cause physical harm. It won't be long, though, before much larger Internet-controlled products - such as shipping vehicles - will become common. "How can we make a device more useful by connecting it to the Internet?" was the question that drove the first 30 years of the Internet of Things. "How can we secure the billions of devices we've created?" will drive the next 30 years.

Download the infograph on the history of IoT here: 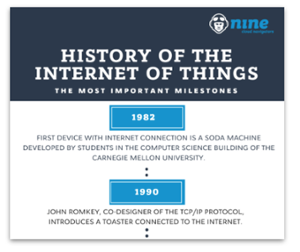 Why build an in-house Kubernetes platform?